About Willow Lake The lake is over 2 acres in size, set in a further 8 acres of meadows.

Dammed at one end the lake is fed by many underground springs. It is lined with Willows, Silver Birch and Poplars. At the dam end depth is around 10 feet, going down to around 4 feet at the house end. The far bank is meadow with iris reeds along the margins. There are 4 swims on the lake, all being on the near bank. The lake bed is made up of gravel and sand and a little silt at the shallow end. 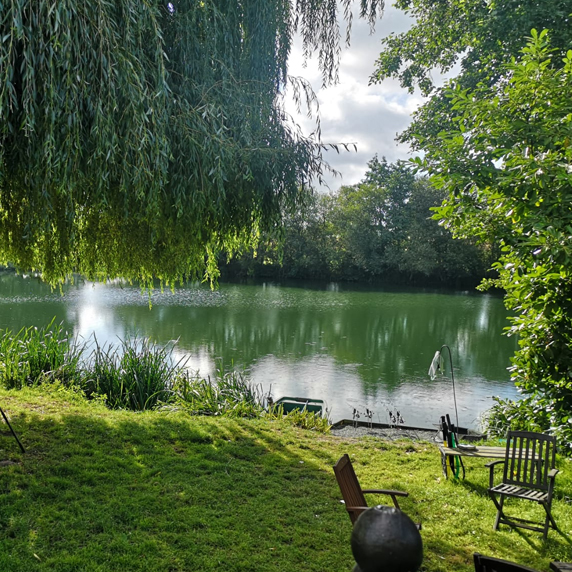 The lake was de-silted in2002 when 8000 tonnes of silt was removed. There is a small patch of lilies in the middle of the lake.

Currently we stock a locally rolled boillie called woodys baits. pellet, party mix and maize, all of which will be prepared and ready for your arrival (7 days notice minimum required).

The lake is virtually snag free, but we recommend a minimum of 15lb breaking strain line. We enforce a BARBLESS OR MICRO BARB HOOK policy. The fishery is ideally suited for 3 anglers but there are 4 swims if you require 4 people to fish .

There is a small rowing boat available for your use (at your own risk) No permits are required and night fishing is allowed.

New owners Stuart & Maxine took over Willow Lake in June 2020 and have worked tirelessly to improve the condition of both the lake and the house. Hours and hours have been spent cutting back the trees from the far bank and removing as many snags as possible from the lake. All swims have also been newly gravelled for your comfort.

Accommodation is a brand new spacious 80sq metre wooden lodge, which comfortably sleeps 6. This is situated right on the edge of the lake with amazing views. The 1st bedroom has a double bed the 2nd has a double and a single bed. Also a double sofa bed in the living area.
The kitchen is fully equipped with everything you need. The living area has English free view sky tv, the tv also has a spare HDMI lead for you plug in laptops or games consoles.
The dining table is also a full size pool table for the rainy days. A luxury bathroom with a rain shower with very good pressure. On the side of the lodge there is a new 5 metre x 1.2 metre round pool. When the lake was drained in Spring 2002 the fish stock was mainly small fish of various species. These were removed and given to a local fish farmer. Once the lake was de-silted and limed, the sluice gate closed, the lake quickly filled. In the Winter of 2002 the lake was stocked with 45 carp between 16lb-28lb plus 5 carp between 29-33lb. In December 2003 a further 39 carp to 28lbs, plus 9 grass carp to 25lbs and some pike. The total stock is now well over 80 fish. Two mirrors of 42lbs & 44lbs were added in February 2005 with an additional 6 carp between  35-38lbs. This will be added to in the coming months.